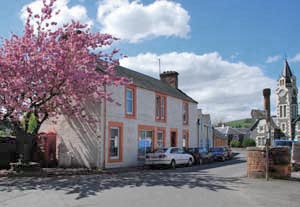 Moniaive, the ‘Hill of Streams’ (from the Gaelic monadh-abh), nestles in stunning countryside where the three glens of Craigdarroch, Dalwhat and Castlefairn meet.

It’s a bustling village with a long history and strong community spirit. It has always been popular and notable visitors over the centuries include King Robert the Bruce, King James IV, Bonnie Prince Charlie and Robert Burns.

Charlie Chaplin’s son eloped here with his girlfriend and got married in a council prefab and more recently the Hollywood Actor Andrew Bryniarski spent a few days visiting comic book writer Alan Grant. Andrew was Lex Luther’s son in the Batman movie and played Leatherface in the 2003 remake of The Texas Chainsaw Massacre and its 2006 prequel, The Beginning. While we’re on the subject of movies, Moniaive was transformed into a small Irish village for Peter Mullen’s harrowing film The Magdalene Sisters.

Bonnie Annie Laurie was born just outside Moniaive and lived here her entire life; Artist James Paterson, one of the ‘Glasgow Boys’, moved to the village on his marriage and portrayed it in his most famous painting The Last Turning, Winter, Moniaive in 1885. The internationally acclaimed writer Rumer Godden spent the last years of her life in the community.

Moniaive is currently home to a wide range of talented and highly skilled individuals including designers, builders, computer experts, joiners, artists, foresters, doctors, writers, teachers, photographers, farmers and musicians. We even have a couple of plumbers. They all have one thing in common, they enjoy life. That’s probably why we have so many activities and events.

Moniaive is an enchanted place that casts its spell over visitors and many decide to settle here. They claim it’s because of the friendly people, the social life or its exquisite beauty but we know it’s magic.

Why not visit and find out for yourself. You’ll be very welcome.

This web site was produced by Glencairn Community Trust and Moniaive Action Project with funding from Dumfries and Galloway Council.